Known as the vendors that often spawn the premium design, the HTC to try their luck in the mobile phone market share by launching HTC Desire 816 Carrying the 5.5 inch screen, the latest device from HTC phablet relying 5 megapixel camera on the front make this mobile phone very suitable for selfie lovers. Running the Sense interface platform and last, Desire 816 is also equipped with a powerful 13-megapixel rear camera. The HTC Desire also equip 816 with BoomSound for qualified audio quality. Let's take a look inside of this best phone deals review.

This HTC 816 has dimensions: 156.6 x 7.9 mm x78,7; Weight 165 g.
With plastic material, Desire 816 which has a weight of 165 grams could produce an elegant impression phablet Android. Featuring a thin margin, 816 Desire still loyal to the unibody design that are often found on the HTC flagship phone. With the back of glossy plastic that can not be removed, remove HTC micro SD card slot and dual sim adapter SIM Nano Desire 816 to the right side of the body. It makes sense, because then the phone can be made as thin as possible without the need to provide more space for the sim card and additional memory, like the iPhone 5 and iOS phones next generation.
For completeness keys, volume keys HTC pinning and the power button on the left. As for the top, HTC put a 3.5mm audio jack port. Users can also charge the battery via a micro USB port which is embedded at the bottom of the body. 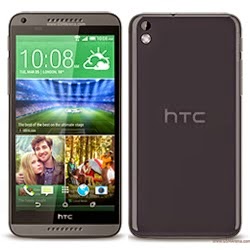